Uncovered head under precipitation;
You have forgotten your umbrella.
Venturing into the dark of anticipation,
Hoping to peruse some gazing stellar,
Only, you forgot to check the weather.
Or even to look at the sky and see
Its signs. And now you – oh, so clever! –
Are deprived of that sense exclusively.
But touch and sound and taste
And smell o’erwhelm your world
‘Til the rain comes over you and
Here, now, at last you must face
The lilac buds and ferns uncurled:
Intimate knowledge of the life of the land. As a passionate bibliophile who is obsessively careful with her own books, I’ve never understood the mentality of those people who write with pen in library books.  If you’re going to do it, at least use a pencil.  Yet while these scribblers provoke varying degrees of annoyance, at the same time, their notes offer a sense of connection to earlier readers.  When you’re on that road of peril and uncertainty that is the Research Quest, there’s something comforting in knowing that a fellow student has tread the path before you, and one hopes, vanquished.

I’m not sure a whole lot of vanquishing was happening with these students, though. 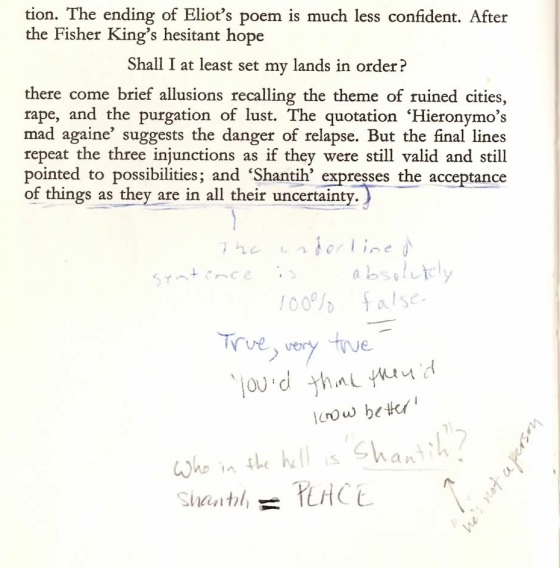 As much as part of me wants smack these people up-side the head for immortalizing their trivial comments in this book, I’m pretty darn amused to see this empassioned little commentary by a succession of readers, each in a different hand and ink (and pencil).  My favorite comment is “he” ‘s not a person.  So, Mr. Who Is Shantih, did you even read the poem?

One of the writers with the blue ink also commented on the previous page. 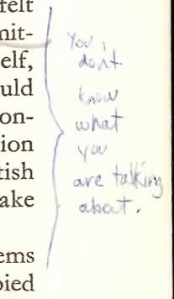 On a later essay in the anthology, our little friend with the black pen proves that, assertions to the contrary notwithstanding, clearly he does not know better.

I’m pleased by the irony of this statement.  Besides the ontological impossibility of a book’s being said to truly “know” anything, might I point out that this book is a collection of essays by different authors?  Inevitably, you’re going to agree with some of them and for the rest, wonder exactly whether they were reading the same copy of The Waste Land as you were.

Ah, students.  Thank you for a few fragments.  While I certainly shan’t be using them to shore up any ruins, they gave me a chuckle (spread from ear to ear)!

Your heart in brass and paper you bind,

Where heroes and loves of glorious time

Cavort on the page and dance in the mind;

Living safely within in their paper confines,

And under their covers, unalterable, keep.

And loves for the art and grammar of signs

Enthrall your sense, yet you still breathe

Dry air in a dry room, because you pine

For permanence. I, unseen, already dread

The day you awake and suddenly find

That those whom you chose were already dead.

Then, darling, drought in heart and in brain,

Remember my name as you wait for the rain.

This is Part III of “East Coker,” which is the second portion of T. S. Eliot’s Four Quartets.

O dark dark dark. They all go into the dark,
The vacant interstellar spaces, the vacant into the vacant,
The captains, merchant bankers, eminent men of letters,
The generous patrons of art, the statesmen and the rulers,
Distinguished civil servants, chairmen of many committees,
Industrial lords and petty contractors, all go into the dark,
And dark the Sun and Moon, and the Almanach de Gotha
And the Stock Exchange Gazette, the Directory of Directors,
And cold the sense and lost the motive of action.
And we all go with them, into the silent funeral,
Nobody’s funeral, for there is no one to bury.
I said to my soul, be still, and let the dark come upon you
Which shall be the darkness of God. As, in a theatre,
The lights are extinguished, for the scene to be changed
With a hollow rumble of wings, with a movement of darkness on darkness,
And we know that the hills and the trees, the distant panorama
And the bold imposing facade are all being rolled away-
Or as, when an underground train, in the tube, stops too long between stations
And the conversation rises and slowly fades into silence
And you see behind every face the mental emptiness deepen
Leaving only the growing terror of nothing to think about;
Or when, under ether, the mind is conscious but conscious of nothing-
I said to my soul, be still, and wait without hope
For hope would be hope for the wrong thing; wait without love,
For love would be love of the wrong thing; there is yet faith
But the faith and the love and the hope are all in the waiting.
Wait without thought, for you are not ready for thought:
So the darkness shall be the light, and the stillness the dancing.
Whisper of running streams, and winter lightning.
The wild thyme unseen and the wild strawberry,
The laughter in the garden, echoed ecstasy
Not lost, but requiring, pointing to the agony
Of death and birth.

What seas what shores what grey rocks and what islands

What water lapping the bow

And scent of pine and the woodthrush singing through the fog

Those who sharpen the tooth of the dog, meaning

Those who glitter with the glory of the hummingbird, meaning

Those who sit in the sty of contentment, meaning

Those who suffer the ecstasy of the animals, meaning

Are become insubstantial, reduced by a wind,

A breath of pine, and the woodsong fog

By this grace dissolved in place

What is this face, less clear and clearer

The pulse in the arm, less strong and stronger—

Given or lent? more distant than stars and nearer than the eye

Whispers and small laughter between leaves and hurrying feet

Under sleep, where all the waters meet.

I made this, I have forgotten

The rigging weak and the canvas rotten

Between one June and another September.

Made this unknowing, half conscious, unknown, my own.

This form, this face, this life

Living to live in a world of time beyond me; let me

Resign my life for this life, my speech for that unspoken,

The awakened, lips parted, the hope, the new ships.

What seas what shores what granite islands towards my timbers

And woodthrush calling through the fog

Apparently T S. Eliot’s favorite Shakespeare Comedy was “Pericles, Prince of Tyre”. Of which I approve completely; Pericles is my favorite as well.

I was told this my favorite professor, just after reading Pericles for the first time. The play is beautiful, stunning, and thrilling all at once. It just barely skates around being a tragedy, but is saved Deus in machina. It has pirates, shipwrecks, jousts, fair ladies, treachery, brave young girls, the power of Art, the depth of human suffering, the way that suffering increase the capacity for joy!

This is a story that encapsulates almost every aspect of humanity, but particularly the simultaneous angst and hope.

And Eliot manages to capture this spirit of the story one, short poem. The title is the name of the daughter, whose artful rhetoric first staves off despair and then unites her family.

When Pericles finally knows his daughter, and in doing do takes the identity of a father, a person, the whole action of the poem comes to a thrilling summit of hope. He now knows who he is, and his vision is cleared: the life, the pulse, the sight!

‘Tis  a wondrous poem. And one of my favorites.

And seems to be one of the more artistically coherent and moving of his poems. One problems that I have with Eliot, is that with his conversion much the driving angst and power in his poetry becomes a bit subdued. “Murder in the Cathedral” is great, but can it compare to “The Wasteland”? And while the “Four Quartets” are really amazing, they seem the have a quieter drive than “Prufrock”. But that might because the drive of Prufrock was having no drive.

But in “Marina,” written right around the time of his conversion, Eliot seems to find a balance of dark and searing hopelessness, and yet end with a song of hope. It is a concentrated dash of Art, in that it both imparts a single clear vision and offers more to come if we but look longer or harder.

One the very first poems that caught my unswerving attention and made see myself more clearly was T.S. Eliot’s “Portrait of a Lady”. I have heard it described as an annoyingly mediocre poem, and I will grant that the heart of the poem revolves around a deep selfishness. But that is just it: the desperate self-possession that cannot commune with any fellow-creature.

It seems like a sad, stubborn poem, constantly recycling its own angst. But the final question is finally a questioning of self that does give me hope that these people are moving toward a better knowledge of themselves, and now will have chance to change and learn how to love.

I only just realized that this coming Wednesday marks the end of Lent,  and the beginning of the Final Days of Christ.

And I realized that I have not prepared for death as I should.

Even though essays and exams have the effect of making wish that I were dead, they do seem to prepare me for dying. (Or any other type of suffering other than misery over grades.)

But this avoidance of sorrow is not exclusive to me: T.S. Eliot wrote on the this as a predicament of modern man.

We live with extremes, and so go out with not a bang but a whimper.

But there is one person who I can still try to imitate; the woman who was simply a companion, watching and comforting as her son was put to death so cruelly. Even if I cannot at this time embrace my own cross fully, maybe I can be the comrade and lover to Christ this Good Friday.