My roommate and I went to see Loving Vincent at the Michigan Theater yesternight.  I’d heard about it on Tumblr – that some enterprising folks had labored to make a movie about Vincent van Gogh where every frame of the action was a painting: 65,000 frames in all, either based directly on van Gogh’s pieces or in imitation of his style, to a rich and striking effect.

The animation of it – stroke by stroke changing, flickering, the whole scene rippling and shifting – was more remarkable than the storyline initially.  The postman’s son, Armand Roulin, is charged by his father to deliver one last letter (recently discovered, a year after Vincent’s death) to Vincent’s brother Theo.  Armand goes in reluctance, remarking on van Gogh’s peculiarities and how he wasn’t so close to the man as his father was.  He consults Père Tanguy, who informs him that Theo died shortly after Vincent, and suggests that Armand consult Vincent’s doctor – a close friend to his patient – to learn the address of Theo’s widow. 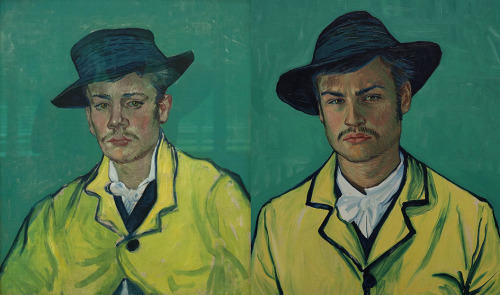 Armand as painted by van Gogh, and as played by Douglas Booth

As Armand goes from his father to Tanguy, talking to Dr. Gachet’s housekeeper, to the innkeeper’s daughter, to the boatman by the river, to Dr. Gachet, and still others, he learns more and more about Vincent: his personality, his habits, the melancholy that hung over him, the brother he loved, the financial worries they shared, and the circumstances of his death.  These perspectives sometimes conflict (“You can’t trust any gossip from the Gachet household,” then “I suppose that’s what the Ravoux girl told you?” and, later, “You’ve been talking to Dr. Mazery, haven’t you”), but in Armand’s search for the truth, sifting through opinions and hearsay and unofficial reports, he finds his own appreciation of and love for Vincent.

The conflicting reports – Vincent was completely calm; he was cured; how could he experience such abrupt shifts within 6 weeks; don’t you know that melancholy can cause rapid shifts in 6 hours; suicidal people don’t shoot themselves in the stomach; normal people don’t cut off their ears; the angle indicates he received this stomach wound from someone else; well, he told me he’d shot himself – turn Armand’s errand into a bit of a crime scene investigation, but without losing sight of the human players involved.

The framing is straightforward but intriguing in its revelation of different lights on the subject: the boatman reckons van Gogh and the doctor’s daughter were close, closer than the doctor wanted.  Others thought the doctor, an aspiring artist, envious of Vincent’s skill.  Several characters refer to a huge fight between Vincent and Dr. Gachet, which preceded Vincent’s death by a couple weeks, before the doctor himself reveals what horrible thing he’d said.

These bits of exposition, or flashbacks depicting the story as the bystanders relate it, were painted in black and white, in a more realistic style, setting them apart from Armand’s journey.  When the letter finally reaches Theo’s widow, Armand receives a copy of one of Vincent’s earlier letters to encourage him on his own path. 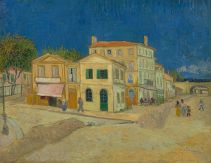 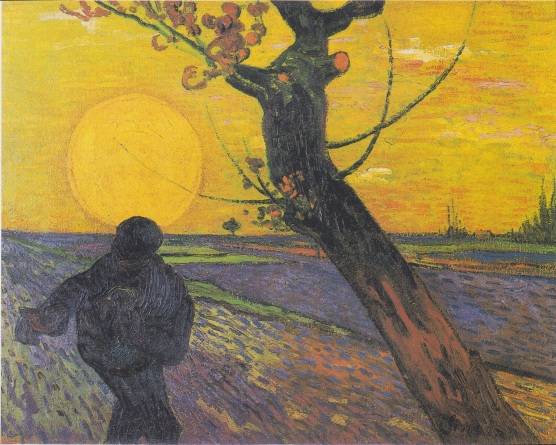 It is a beautiful film, especially rewarding to those who recognize The Zouave, The Night Café, The Yellow House, The Sower at Sunset, Wheatfield with Crows, and the many other works used in the storyboard.  The facts of the matter – that Vincent’s youth was hallmarked by failure, that his prolific work did not sell in his lifetime, that he struggled with poverty and mental illness, that he died at 37 – are never hidden, and as presented, they made me cry a lot.  But rather than focusing solely on the blue and grey of van Gogh’s life, the movie is awash in shades of amber, saffron, and goldenrod: contemplative and hopeful at the last.