As you can see, we’re deep into exam week and I’m abusing the English language left and right out of sheer exhaustion.  Anyway, I shall be limiting myself to the books on my shelf here at school.  Were I at home, I’d get somewhat different results (which numbers, if we were going to stick to the physical volumes on the shelves, would be heavily skewed by the fact that I own 27 of the 28 volumes of CLAMP’s Tsubasa: Reservoir Chronicle manga).  But here on my lovely handmade bookshelf of golden wood, within an arm’s reach of my desk, the maximum count is 12 volumes by Oxford don C.S. Lewis.  However, because these almost all happen to be nonfiction (with the exception of a poetry volume, a novella, and a few short stories), I also shall include the top fiction count, in order to give a slightly more accurate representation of the kinds of stories that win my heart.  Thus, I also include (surprise) Patricia A. McKillip, for 7 volumes.  Though technically if we want to count individual works contained in omnibus editions, that’s 10 books.  Err, though I own duplicate volumes of 2 of them.  But that’s further proof of my love, right?

While Lewis’s fiction is delightful and instructive (Philip Sidney would be proud!), I think I particularly love him for his non-fiction.  He has such a clear, conversational prose style that takes almost no effort to read.  And he has a wonderful way of taking ideas that I’ve had myself and articulating them much more clearly than I can, such that the experience of reading him is almost a discovery of my own thoughts.  My two favorites of his nonfiction works are The Four Loves and An Experiment in Criticism.  I enjoy them because they are meditations on two things that I value greatly as both a Christian and a storyteller: love and literature.  I particularly recommend the latter to all fellow bibliophiles: it describes beautifully many of the things that we find so appealing, no–enchanting about the activity of reading (and of course, rereading!).  I offer you two quotes, one from either book.

Friendship arises out of mere Companionship when two or more of the companions discover that they have in common some insight or interest or even taste which the others do not share and which, till that moment, each believed to be his own unique treasure (or burden).  The typical expression of opening Friendship would be something like, ‘What?  You too?  I thought I was the only one.”

Literary experience heals the wound, without undermining the privilege, of individuality. There are mass emotions which heal the wound; but they destroy the privilege. In them our separate selves are pooled and we sink back into sub-individuality. But in reading great literature I become a thousand men and yet remain myself. Like a night sky in the Greek poem, I see with a myriad eyes, but it is still I who see. Here, as in worship, in love, in moral action, and in knowing, I transcend myself; and am never more myself than when I do.

—An Experiment in Criticism

I already touched on some of the things I love about her stories in my meme post a few weeks ago, but I’ll see if I can expand that a bit.  Well, for one thing, most of her stories (with the exception of an early trilogy and a few duologies) are stand alone stories that feel cozy in their self-contained worlds.  And speaking of worlds, while deeply intricate worldbuilding can be magical (see Lord of the Rings or Dune), sometimes too much worldbuilding can be almost overwhelming and burdensome to the reader.  McKillip’s worlds are always well-realized, but the details create the background, against which her delightful, sympathetic, and interestingly-named characters can shine.  And so many of her characters are ones that readers will like, because they share our own loves for mystery, music, history, and stories.  I also love that McKillip uses a wide cast of interesting characters from all social stations and occupations, rather than focussing on a single “chosen one,” as a certain branch of fantasy novels tend to do.  And her language!  Her prose is beautiful, sensuous and evocative and perfectly pitched to create the atmosphere of her chosen setting, whether it be a cozy harbor town, a wild sea-swept island, or the music-filled halls of a royal conservatory. 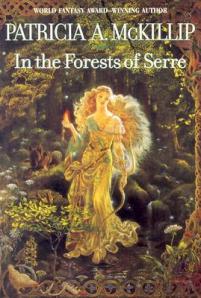 I recently discovered the existence of her very second published work, the Throme of the Erril of Sherill, and was blessed to find a beautiful ex-library copy for my very own.  I shall leave you with the lyrical, enchanting opening lines.

The Erril of Sherill wrote a Throme.  It was a deep Throme, and a dark, haunting, lovely Throme, a wild, special, sweet Throme made of the treasure of words in his deep heart.  He wrote it long ago, in another world, a vaguely singing, boundariless land that did not exist within the kingdom of Magus Thrall, King of Everywhere.

8 thoughts on “The Mostest Authors: Lewis and McKillip”