As an avid reader, I’ve discovered that there are certain books that turn out to be defining moments in your imaginative, intellectual, or spiritual landscape.  They’re watersheds that you might not even notice at first, but you can look back and realize that you see the world differently because of them.  I’m not sure I can say I wouldn’t have learned what I have without reading certain books–if God wants you to grow in a certain direction, I think He can use any experiences you have–but I can definitely see how some books I’ve read have shaped me into the person I am today.  Two of those works would certainly have to be J.R.R. Tolkien’s The Lord of the Rings (along with the Silmarillion) and Neil Gaiman’s Sandman.

Arda Unmarred, the Work of the Valar

Tolkien taught me a renewed delight in the natural world around me, which in turn opened the door to my first steps of a truly personal relationship with God.  It’s funny, I know I must have enjoyed nature before I read Tolkien, but I think I had trouble taking delight in nature as an expression of God’s love and beauty.  God as Creator was kind of a dry, Sunday school topic for me, but when I read of the Iluvatar’s creation of Arda through the Valar, I discovered the romance in the idea of creation.  Amusingly in retrospect, I preferred Tolkien’s version of the story to the Biblical one, mainly because it was fresher to my imagination and less filled with years of spiritual baggage and wrong assumptions about God.  But I started seeing that there really was a glorious artistry full of beauty and love behind creation.  And little by little, I began to let God into my heart along with the beauty I saw.  I felt rather as though for the very first time, I was saying to God, “Huh, I guess you and I really do have something in common after all.  I like this world you made, and in fact, I believe you had me in mind when you made it this way.  I think perhaps I’d like us to be friends.”  My relationship with God isn’t anywhere near done growing, but such was the start.  If I hadn’t wished for Middle-Earth, I wouldn’t have found that what I needed was here.

And actually, Sandman helped out in that respect, too.  When I read Tolkien, I was a teenager, and like most teenagers, wasn’t completely satisfied with my life, and would have much preferred to escape to somewhere more exciting, magical, and epically meaningful than my seemingly mundane existence.  While I did eventually start maturing past the escapism of being a teenager, I still had the implicit impression that this world still wasn’t quite as magical as the ones I read about in books.  And then I discovered urban fantasy through authors such as Neil Gaiman, Roger Zelazny, and Emma Bull.  They told me that yes, of course, 21st century earth can be just as magical as the Third Age of Middle-Earth.  And in fact, things like coffee makers and cars and apartment buildings are really quite magical in themselves if you just know the right way to look at them. 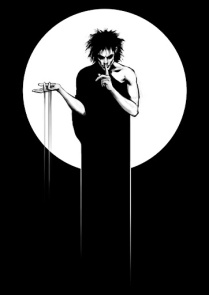 Yet among these urban fantasies, Sandman stands out to me for a number of reasons.  For one, it taught me (along with a very dear friend of mine) to see that everybody you pass in the street has a story.  That guy in the car next to me, the tired cashier at the store, the quiet girl in my English class–no matter how banal and uninteresting these people may seem, they each have their own stories, hopes, dreams.  Like the incredibly varied cast of Sandman, such very ordinary-looking people might just be having extraordinary adventures, if I could see their whole lives.  So who am I to dismiss them as boring people?  But I’d never thought of it that way before.

Secondly, the world of Sandman opened a whole new imaginative vista for me.  Just as I can’t conceive of my imaginative landscape without Middle-Earth and elves and hobbits, I can’t fill that world with magic without thinking of Gaiman’s world ruled by gods and Endless.  I’ve imbibed a good bit of Gaiman’s methods of magic, and my approach to the fantastical in my own writings and daydreams will always be shaped by it.  And, well, the stories themselves stick with you.  They’re stories of muses, gods, angels, and demons, artists, poets, and other dreamers–Dream himself–fae, and humans.  No, I’m not going to forget these.  Besides, I defy any female dreamer to read Sandman without falling in love at least a little with Dream.

One thought on “A Few Literary Watersheds”